I’ve recently joined The Historic Sew Fortnightly, which means I not only have deadlines for school and work, but also my hobby.

And I missed one!

I meant to submit this piece for the challenge that ended last night, but I missed it by half an hour. I would have been really lucky to get it done by then, considering that I hadn’t been a member of the group for long. Like, five days or something.

This project began when I decided to remake my little white reticule because it was a little too little. So I tried the big, pocket-shaped embroidered style popular in the late 1790s and early 1800s.

So here’s my adaptation; 100% hand sewn with linen thread and made with linen and cotton fabric, and a cotton cord for the drawstring. And probably about 2 cups of starch. Again, I used my huge embroidery vocabulary of two different stitches here. Completed, it’s about 14″ deep by 10″ wide, certainly big enough to hide an iProduct in.

For reference, here are some originals from Two Nerdy History Girls here. And some variations on the theme, from the Met, here and here.

I rushed through mine and finished it to the point of being juuust useable … but now, hey, since I missed the deadline, why not keep working on it? I’m thinking I’ll embroider the front pieces more. It could use more fancy. 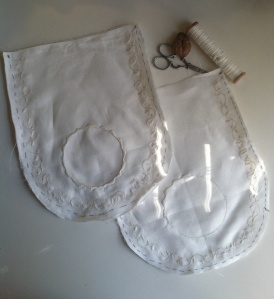 I cut two U-shaped pieces of linen, and two of cotton for the lining, and starched the bejeezus out of them because I didn’t have an embroidery hoop. I also tacked the edges together. The embroidery designs are adapted from the originals linked to above. 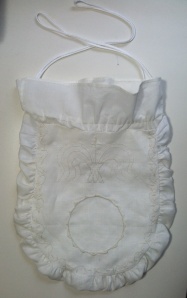 I gathered a strip of linen to the edges to make the sides, and used a scrap of cotton for the drawstring casing and ruffle at the top. 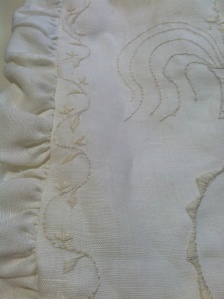 Close-up of the embroidery, which I like, but is super basic. And that weird circle thing in the middle of the design could have been executed wayyy better. And what the heck am I going to put inside the circle? A peacock? Maybe a basket of flowers or a cornucopia? Phhh. 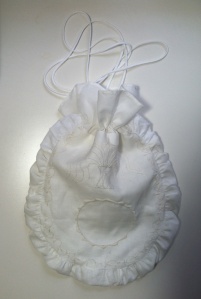 I didn’t expect to be so busy with school this month, so writing a blog post had to be delayed. But I’ve been sewing for short amounts of time every so often, and I’ve gotten a lot more done!

1) The bodiced/un-bodiced petticoat hasn’t been altered yet; I guess I got bored,

2) My printed blue cotton dress is now finished; I added hooks & eyes to the back (not my original plan, and not how the original closed, but now it’s wearable),

3) I made a nice white linen chemisette with cotton lace trim, 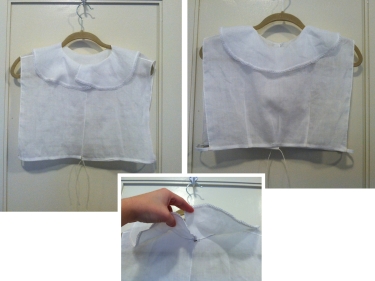 I eyeballed this from the earliest, simplest, documented chemisette I could find. It’s probably most accurate for 1800-1815. The collar doesn’t really fall the way the original did. I really wanted a dorset button for the closure under the collar, but I couldn’t find my button stash at the time. If I find it I’ll upgrade from this mismatched hook & eye.

4) I’ve gotten about halfway done with that 1760s waistcoat I began a little while back, 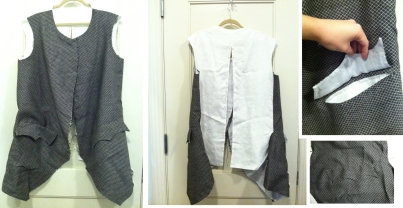 It’s wrinkly and saggy on my tiny hanger, but look at that wool. It’s black with a white diaper pattern woven in, and it’s gorgeous. The rest of the waistcoat is made from some of the nicest linen I’ve ever found. I’m really excited for how it’s turning out!

5) because I wanted a cool hat, I made a small, green linen calash, 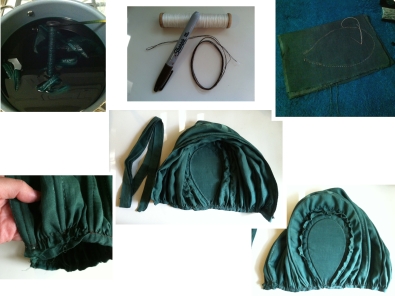 I dyed linen green, and I chucked a spool of linen thread in the dye too – but of course it didn’t take color so well, so I had to Sharpie the thread darker later. And I didn’t take enough photos of the process, but the body of the calash is basically a rectangle with a number of metal bones running through it, and the ends of that are gathered to a binding. The back is a teardrop shape, boned, and the calash body is gathered to that. 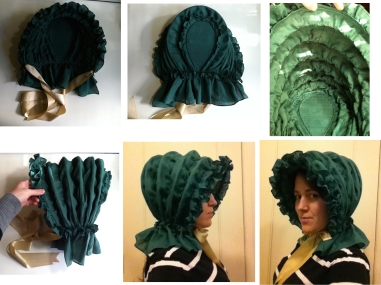 Finished! It’s not perfect but it’s cool. It turned out a little too small; the ridges touch the top of my head. I also made it too long, so I had to add thread stops inside to keep it from extending fully. Right now it has icky polyester ribbons, but I want to get some nice silk ones for it soon.

6) and because I don’t know when to stop, I decided that I need a nice comfy pair of half-boned 1780s stays. They’d be better for the events I do, which involve setting up displays and then sitting for hours on end – something my fully boned 1740s/60s stays aren’t so nice for. I haven’t taken scissors to cloth yet, though, I’m still thinking about how to do those. Later.

And finally, a tiny life hack. I needed to shape and pad out this mannequin a lot to photograph my 1880s bodice, and my epiphany was to use old shoulder pads. I pinned them to the mannequin making sure the pin heads were flush. They really helped puff out the tails. I’m thinking of making some ‘for real’, with nice cotton and fiberfill. 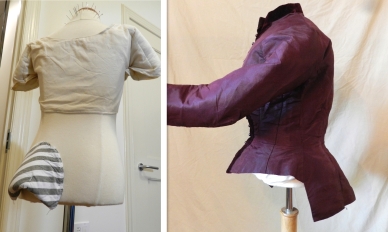 Finished and … not so finished

It’s done! The un-bodiced, bodiced petticoat. Could use a good ironing. 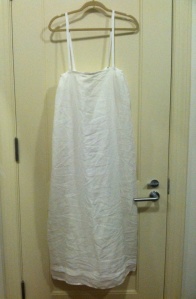 But as I look at it, I see a mistake. I should have concentrated the gathers further to the back. Right now I think they’re going to be under my arms, which will make the dress over them wrinkle and bulge. 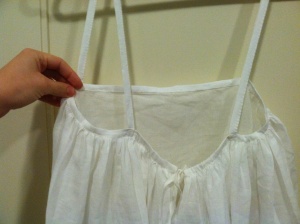 Sigh. So I’ll try it on tomorrow and see if I can make it work. If not, I’ll rip the sides of the waistband out and re-sew it. Yayyy.

In the past few days, I’ve hand-sewn half a silk regency gown, half a bodiced regency petticoat, finished repairing a quilt for a friend (by hand), begun a c. 1760-70 linen and figured wool waistcoat for my dad, and made a hand-embroidered reticule. 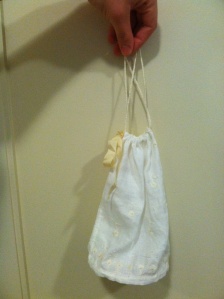 It’s kind of saggy-looking without anything in it. Linen with linen embroidery, cardboard base, and a silk bow. Eventually I’ll add some nice silk handles/drawstrings.

I’ve shelved the cote idea until next year’s Renn Faires. I don’t have the time to sew a new cote this year. Meh.

I’ve been putting more time into is my 1790-1810s clothing. I’m realizing that I’m really lumping a lot of variances into one outfit. I’d love to specify the outfit to a smaller, earlier year span, but that’s going to have to wait, too.

So today I’m (writing my paper for school) assembling a bodiced petticoat, which is  confusing me. Not over the construction, that’s fairly straightforward, but over its actual existence. The bodiced petticoats I see seem to actually be bodiced skirts, meant to be seen, and worn with a short jacket over them.

I’m having trouble finding attributed 1790s-1810s petticoats. Usually I would interpret that as meaning this garment wasn’t so popular.

But women had to wear petticoats, right? From what I can tell from prints and paintings, women’s skirts are too full in general to be just a dress skirt worn over a chemise. Maybe the petticoats of that era were often remade into other garments, and just didn’t survive very well. Or maybe I’m missing something!

I found one from The Met: linen, from America, and dating from the early 19th century – and the only photo of it is super cropped. 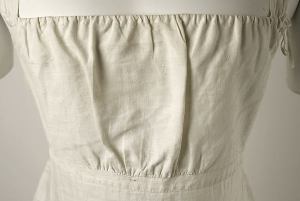 Bodiced petticoat, from The Metropolitan Museum of Art

You can still tell that it’s got little straps over the shoulders, a surprisingly low waist, and a drawstring neckline that ties near the left armpit. It’s almost a modern slip, rather than a petticoat.

I’ve also seen a few unattributed photos of empire/regency bodiced petticoats floating around the interwebs – some have bodices, and some just have little suspenders. I think I’ll go with the suspender model; while I can’t find much to back up this style, it makes sense to me, and will eliminate some bulk, since I’ll be probably wearing it in warm weather and inside heated buildings.

So my petticoat is made of a nice, fine 100% linen, and all hand sewn with linen thread. 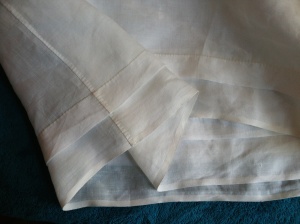 I left the selvage at the hemline and added a pleat. I’m hoping this adds a little more body to the skirt, especially at the back. 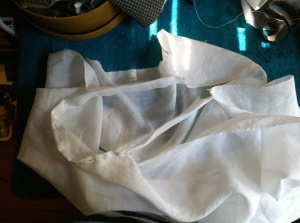 The waistband, halfway pinned on. 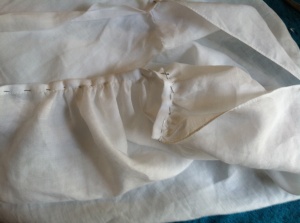 … and now halfway sewn on … 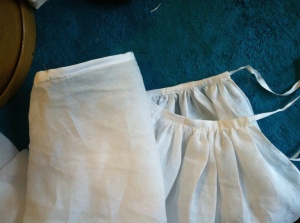 … and finished, with the gathers concentrated at the back. I was lazy and didn’t want to go buy tape for the ties, so I just cut the selvage off some linen. It’ll work for a few wearings. The ties are sewn into the waistband a few inches in, so they serve as a partial drawstring.