Front view, with the fronts crossed more than they would be if it was worn.

A pattern! The next generation! Because it’s far too delicate to be displayed, and far too awesome to sit in a acid-free box forever. It has to live on!

With the fronts folded back. The front buttons are backed with three small 4-hole shirt buttons, to keep the main buttons attachments from pulling the cloth.

Cuff detail – There are three of these silk macrame buttons down the front, with silk loops instead of button holes. 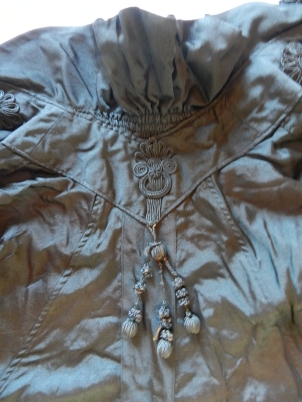 The back of the collar and upper back detail 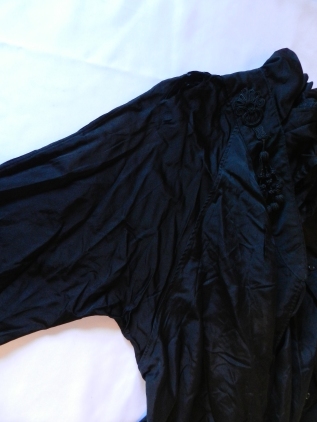 Front and shoulder detail, with a silk cord appliqué at each shoulder. The appliqués have three silk tassels with silk-covered wooden beads at the ends. And, by the way, the true color. Damn digital photography in low light.

The coolest thing about this coat is that the person I bought it from said it came from a trunk with a tea gown and a bonnet (both of which I have as well, and both of which are fantastic). The bonnet is decidedly older, ca. 1875-1885, but the tea gown is the same date range as this jacket. I would love to assume they were worn together, and since the jacket is so light (it’s unlined) perhaps they were. They look great together (I put them on my mannequin for a moment last week, before I began to clean and pack them).

So here’s the gown, kind of. Beware, these are very poor photos; I took them with my phone. They’re from while the tea gown was drying after I washed it. I’ll get the gown on my mannequin for some real photos later.

The gown’s completely made of cotton netting and lace. It’s got a net under-bodice and a net under-skirt, but it’s still super transparent. It would have looked so frothy and lacy on somebody, with all the proper under-clothes. The gown itself is in super condition, just a little yellowy. It was musty and yellow-er before I washed it. These photos don’t do it justice. 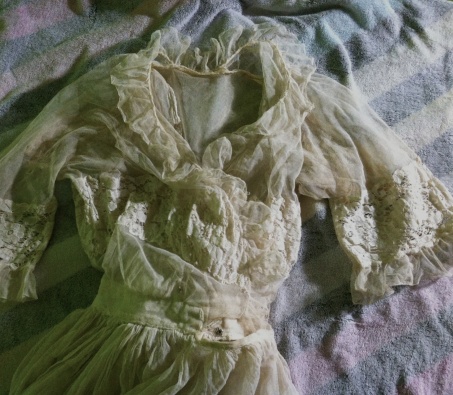 The bodice of the gown, all net and three different types of lace. It has a bloused, wrap front. 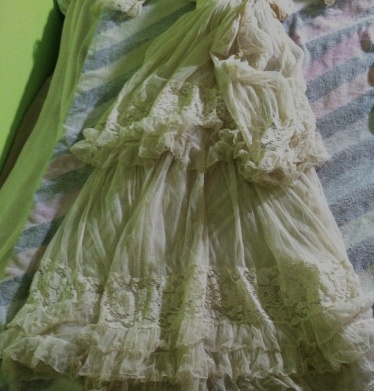 The two-tiered skirt, all net and lace.

So I’ll get a few pictures of the stuff later, and I’ll work on the pattern. It’ll be “a la Patterns of Fashion”, just a measured drawing on graph paper, but I’ll post it for anybody who wants to spread the awesome 😀

I'm an Anthropology / Fashion History and Material Culture graduate from The University of Delaware, currently working on a Master's in Museum Studies. I'm a living historian interested in costume and culture from years before. I love researching the mundane and the everyday that has changed or disappeared since. I re-enact the 18th century, and I recreate clothing from that time. This blog is where I'll write about my research and projects. END_OF_DOCUMENT_TOKEN_TO_BE_REPLACED
This entry was posted on Tuesday, December 30th, 2014 at 10:02 pm and tagged with 1900s, 1910s, Clothing, Costume, Dress, early clothing, Edwardian, Edwardian Fashion, fashion, historic clothing, Historical reenactment, historical research, living history, Material Culture, recreating history, sewing, Vintage Clothing and posted in 1900, 1900s. You can follow any responses to this entry through the RSS 2.0 feed.
« So I said I wasn’t going to be writing until after Christmas –
Some vintage clothing, finally … »

2 responses to “For Continued Awesome …”