I’ve just found a few interviews with some of the talented folks who worked on the Charles James: Beyond Fashion exhibit currently at The Metropolitan Museum of Art. Enjoy!

A ‘Paper Dress’ … From the Late 15th Century

Yeah okay, so not entirely paper.

Dr. Henrike Lähnemann, chair of German Studies at Newcastle University, has delivered a series of lectures looking at the use of paper in textiles. The items in question are late 15th century German dresses that once clothed religious statues. The Bodleian Library has published a short blog post about it here.
Paper has been documented as used in other pieces of clothing, too, but since until recently I’ve only studied 18th century clothing in depth, I’ve never noticed it used during another century. I’ve seen newsprint used in a banyan cap and some wallets, and paper or cardboard used in stays. I used two types of paper when I sewed myself an 18th century wallet, and it’s held up really well.
So why not? Paper isn’t too washable in the soap-and-water sense, but it was a cheap and available material, and works well as a light stiffener. Apparently, people figured that over 500 years ago, at least. Have you seen paper used in clothing from this time, or earlier? Comment below!

I have a difficult time appreciating older costume books. I’ve been kind of scarred by Earle and McClellan. When I got this book, a first edition of The Mode in Costume, I wasn’t expecting much, and the book really delivered for a while …

So where do we start on this black gown … neckline, sleeves, waistline, skirt cut … The francaise next to it is pretty much okay, though. Any book that uses Earle as a source, however, is going to be kinda-sorta okay in some places, and hideously awful in others.

It’s one of those here’s-what-everybody-everywhere-wore-since-the-dawn-of-time books, and you can never expect these books to have enough detail to satisfy a moderate interest, or to have thorough enough research to build upon. I flipped from Egypt to 1800s Europe in a few minutes and didn’t see anything that really caught my attention – until I realized that the clothing in the book went right up to the date of publication. There’s no way the authors could have gotten their own clothing wrong. 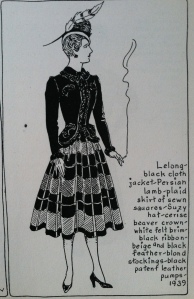 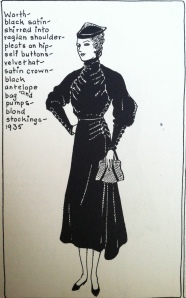 Huzzah, authors! I mean, these are gorgeous. For fun (because I don’t know what the rest of society deems fun) I went back and read the forward.

Yes, it’s a statement of the state of the fashion industry at an incredibly turbulent time. I’d always heard fashion professors say that 1930s fashions ‘fossilized’ through the 1940s until Dior’s New Look came in, but I never knew that people acknowledged this during the war. The forward also notes the opportunities American designers had during France’s occupation, without naming anybody.

So do I like this book at all? Kind of. If you’re doing historical clothing research from before 1900, don’t you dare use this book. Really. If you want an overview of 1910-1940 clothing in France and the USA, it’s a start. If you want to know what people thought of fashion history in the 1940s, and what inspired costuming, go for this one. For the history of fashion history, it’s pretty awesome.

Isn’t she beautiful. Her name is Mabel.

This is what goes into my gorgeously professional photo shoots (please read that with sarcasm):

Half a pillow (lifehack: WalMart pillows are cheaper than buying stuffing in a crafts store!)

Et voila, after some strategic cropping: 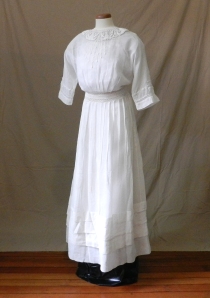 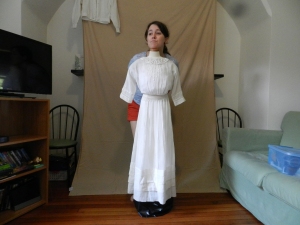 I’ve been told the Irish invented them. Or Native Americans. Or whatever culture you feel strongly about or can claim ancestry from. Because descending from a culture that didn’t come up with pants for eons is a little embarrassing to us ‘Muricans.

Today, my award for best invention ever goes to the Chinese. Two 3,300 – 3,000 year old burials were recently excavated in the Tarim Basin, and yep, the dudes were wearing pants. Check out the weave on those things, too. Pretty snazzy.

So in the list of things we’re thankful for, thanks, 4,000 year old pastoralists, for pants. They rock.

Exposed: A History of Lingerie

The Fashion Institute of Technology in NYC has a new exhibit which opened today at noon – Exposed: A History of Lingerie. I had a few hours today to go see it. I still had a bad taste in my mouth from the last time I went to see a FIT exhibit. I was really hoping for a better experience this time.

The exhibit begins with a few historic pieces such as 1880s corsets, and modern counterparts drawing on those designs, such as Rudi Geinrich creations. The rest of the gallery is a timeline of underwear, starting with rare 1770s sleeved stays and ending with a handful of 2014 pieces. The garments on display are all wonderful examples of their type. For the constricted gallery space, there’s a lot of stuff to see, though many facets of 18th/19th century lingerie (such as drawers or chemises) are not shown.

Since the exhibit was in the same gallery space used for RetroSpective, the clothing was poorly lit. The beautiful, flowing lace, silk and tulle were reduced to 2D shapes, seen from 4-6 feet away, tucked into the shadows. The curators could have achieved better visuals with large poster prints.

Through the gallery I saw some incorrect terminology, but nothing else stood out to me. I have a feeling that the labels are farmed out to undergraduates for grades.

I thought the most misleading thing about the exhibit was how some of the garments were displayed. You can’t understand a 1815 corset when it’s laced onto a modern form and has no busk: you’ll never know the real shape. There was also a 1890s princess slip with a corset over it, the garter straps hanging down to nothing. It was apparent that whoever dressed some of the mannequins really had no idea what he or she was doing, and had no desire to learn how do it it right.

I was moving through the 1960s pieces when a tiny old woman next to me tapped me on the arm and pointed to the 1962 pantygirdle. “I have that in my drawer” she said. Apparently, she was a lingerie designer from the late 1940s up through the 1960s, and had designed pieces that were in competition with pieces FIT had on display. She knew her stuff.

And man, was she pissed.

“That’s incorrect. And that, too. He never designed that. He never used that dart in the sixties. This isn’t his. He wasn’t known for these. That’s not a babydoll dress.”

Obviously insulted, she systematically took apart every label from 1950 through 1980, then she told me “I’m 97, I lived this.” and to the side, “I’m gonna call up Valerie and spank her.”

In my less-than-perfect opinion, this exhibit was more of the same let’s-put-the-Delphos-dress-on-display and let’s-shock-people-with-corsets. The gallery space is poor, and the exhibit isn’t very informative or accurate. In the opinion of the designer I met in the 1960s section, the exhibit was a completely incorrect view of her life and career – she’d both made and worn these garments. She had every right to be pissed.

And according to her, Valerie Steele has some explaining to do!