Next addition: a tripod. That should have been obvious, but whatever.

I finally had an unplanned day off from works, and I decided to spend a little time on the collection. I went out and picked up three little dress forms (Craigslist FTW) which made me happy. I have a handful of infant and child’s clothing that really should be photographed on forms, and now that is very possible. Was, very possible. It was the first thing I did when I got home.

Seeing clothing on a human form is always enlightening. My favorite moment was when I was having trouble dating a tie. It was either a short 1970s tie, or a long 1940s tie, according to the dimensions. I was leaning toward the 1970s because I’m always hesitant to date something earlier – it usually isn’t. I was sitting at the table with the tie on a few pieces of archival paper when my dad, who was watching, said “well, let’s see.” He took the tie, put it around his neck, and he didn’t even get to knot it when I said “it’s from the 1940s!” There was no doubt. I just needed to see the thing in situ.

I’ve been having the same trouble with this one child’s blouse shirt thing. The bloused effect dates from between the 1800s to the 1840s. There’s no machine stitching to date it, without a doubt, after the 1850s. I spent a week scouring the Interwebs for any picture of a kid wearing something like this, but I only found a few portraits from the 1830s-40s.

The garment in question.

I’m fairly confident that it’s from that era. The bloused effect, the short puffed sleeves, and the squared neck seemed to fit in there. The somewhat high waistline would suit the 1830s, when waistlines were slowly dropping from the super-high position of the 1820s. I was still a little skeptical, so I figured I’d be able to tell better when I got the thing on a form.

I’m still fairly confident with the 1830-1840 date span. The biggest shock is that both that 1888-1892 bodice and that light blousy top were made for kids between 5-7 years old. Looking at them on a flat surface or stored in paper, I couldn’t have ascertained that. Heck yeah, dress forms.

Levi’s has been in the news today, and for an interesting reason. A sigh of validated relief rises from every stressed-out college student as they hear the CEO of Levi’s say yeah, you can wear those jeans again. And again. And again.

I’ve heard the argument for not washing your jeans before, but I never heard of how else denim purists would clean their jeans, if not washing them. One option seems to be freezing them. Pretty cool. Pun intended. Obviously I’m interested, since I’ve already been throwing every piece of antique clothing I buy into a few Ziploc bags and in the freezer for a month.

OK so yeah, science says that generally, freezing isn’t going to help reduce bacteria. Maybe if you keep your jeans in the freezer for a month, as I’ve done with my antique clothing, freezing will be more effective. I don’t know; I use it to kill mold and it seems to work really well. The funnier side of this debate is this silly opinion article. The author is pretty anti-freezing, and suggests that microwaving is the most efficient way of sanitizing clothing. In my opinion, microwaving doesn’t sound like a solution. It might set all my ketchup stains, and that’s a bummer. Also, the metal rivets in jeans tend to be metal, and metal and microwaves kind of have this track record thing going on. Obviously I’m interested,  because now I want Mythbusters to do an episode to see if you can really light your pants on fire on the popcorn setting. I’d totally watch that.

There’s a whole other issue here, though, and everybody seems to be missing it. The really crucial debate is if you’ve got anything else in the freezer with your frozen clothing. Even when double-bagged, the clothes tend to pick up smells. Obviously I’m interested, since I now own half a 100-year-old layette that smells like onions and frozen French Toast.

Recently I took a little time to visit the new Charles James: Beyond Fashion exhibit at The Metropolitan Museum of Art. I was both impressed and not impressed with the whole thing. I suppose after experiencing Alexander McQueen: Savage Beauty, Charles James is tame subject matter.

So let me air the cons first. The exhibit is very unfortunately spread over a few small galleries in the museum, meaning one has to hike all the way from European or American statuary, through the Wrightsman Galleries, through the Medieval galleries, across the lobby and through the Egyptian wing to the Temple of Dendor, and finally down a flight of stairs to see the second half of the exhibit. Any atmosphere that the exhibit was meant to have is dissolved after having to follow vague signs and cryptic security guard’s instructions across the museum, elbowing through crowds as you go. This trek would be better with the help of a map, so FYI, if you go, grab one before you head into the Greek & Roman galleries (where the first exhibit begins).

So there’s really no atmosphere, which is a shame – but that’s the worst aspect of this exhibit. The cool parts are as follows:

1) So these ballgowns are really complex. The museum broke them down with computer animated videos showing how each was draped, cut and sewn. Some videos even show X-ray images of parts of the gowns. The brilliance of James’ design is in his drapery, and these animations and live camera feeds show exactly how awesome his work is. The entrance to the first gallery even has a handful of muslins on dress forms, so you can see the process of designing the gown.

2) Robotic arms with cameras at the ends move around the gowns, showing close-ups and angles that you might not see from where you stand.

3) The gowns are so well-lit, even for being in a darkened room, that you won’t miss a detail. Somebody did an awesome job with that. Most of the gowns are on their own slightly elevated platforms, and you can actually walk all the way around them. Others are on a larger platform, sometimes partially behind glass, but the design of the exhibit allows you to see from most angles, even if it means crossing the room. Hallelujah! No more security guards getting nervous when I bend over to see something a few inches closer.

The brilliance of this exhibit is the way the gowns are presented, and the videos and camera feeds. The exhibit designers and curators certainly chose the perfect way to illustrate James’ genius, and they executed it perfectly. It’s the next best thing to actually holding the gown itself. Visitors get to see truly iconic designs, up close and personal. It’s not a complete experience, and it might have a bunch of frustration thrown in the middle of it as you try to find the next gallery (I had given up finding it when I found it; I was walking out when I saw the entrance), but the presentation of each item is magnificent.

I love it when people dissect clothing and are able to tell a story from what they find. So this is pretty cool … The National Gallery of Victoria is kinda sorta doing that with some of their collection. Check it out!

About a month ago I bought a great late 19th century bodice. I got it on a whim, thinking from the photos that it didn’t look like it was made out of silk. I’ve been trying to avoid silk because I can’t take care of it as well as bast fibers. Well, when I unpacked the bodice, I found that it was completely cotton! Tiny happy dance.

The bodice is sized for a teenager. This means that the style it is made in is neither for a woman or a child – it’s like transitional fashion. I’m guessing it was worn with a long skirt, as women wore, but there’s a possibility that it was worn with a mid-calf skirt, the way tweens dressed. I’m not completely sure yet.

Fully lined in that ubiquitous glazed brown cotton. The bodices closes with a long row of hooks & eyes, and two rusty straight pins still in place. I’m not sure how the collar stayed put, though, there are no pins, hooks & eyes, or pinholes anywhere on it.

It’s completely handsewn, except for the topstitching on the flap at the front, the cuffs, and the little red sleeve caps. It was probably made from a pattern by a fairly experienced but non-professional seamstress – it’s a complex pattern, but I can see where the seams were once sewn in, ripped out and resewn. So … there’s no tag. Nothing that would make tracking it down easier. Boo.

It doesn’t have any boning or boning channels, which kind of strikes me as odd for a bodice from this period – but unboned bodices from the 1880s-1890s are out there.

So I know it’s from the 1880 or 1890s. I’m figuring between 1885-1895, because the sleeves are just a little gathered underneath the sleeve caps, hinting at those huge ridiculous poofy sleeves that came into fashion in the 1890s. It doesn’t have the long slender waists of the 1870s/early 1880s, either, which were called cuirass bodices. 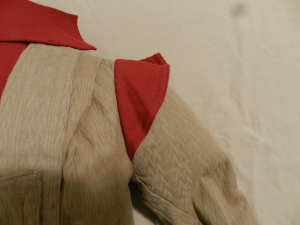 Sleeve cap from the front

From the top, with the cap folded up showing gathered shoulder

Here are some similar bodices, all from the early 1890s.

This lavender silk bodice has similar sleeve caps, though larger, and a similar waistline. I can’t see how this one closes, possibly along one of the bands of beading in front. 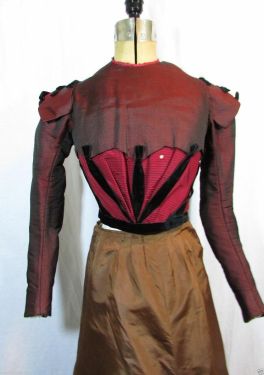 Another bodice with the same sleeves, sleeve caps, and waistline. I can’t see how it closes but it must be down the side.